She wrote this book to provide a detailed account in English of that barbaric episode. Using primary sources such as diaries, government documents, newspaper accounts and interviews with survivors, Chang fashions a graphic tale of almost unparalleled atrocity. Men, women and children were beheaded, machine-gunned, crushed by tanks, burned and buried alive.

Although it is clear that she is passionate about the subject, Chang gives a balanced account. Rape and pillage are as old as war itself, but what is particularly disturbing about the sack of Nanking is that nothing was taboo.


But when general war broke out between Japan and China in , the Japanese General Staff argued that if Chiang Kai-shek's capital of Nanking fell, the Chinese Nationalist government would give in. Nanking was captured in December, and the willingness of army commanders to see this former center of anti-Japanese agitation punished led to one of the most brutal crimes in the long annals of wartime barbarity -- the "rape of Nanking," of which this book is the first comprehensive examination.

The Japanese army not only looted and burned the defenseless city but carried out mass executions of prisoners of war and systematically raped, tortured, and murdered hundreds of thousands of Chinese civilians.

Chang's account, based on extensive interviews with survivors and newly discovered documents, is utterly compelling yet, at the same time, in places unbearable to read. The author is at pains to emphasize that the massacre was a systematic effort designed to terrorize and carried out in full view of international observers, some of whom played heroic roles in trying to stop it.

Far from a temporary lapse of military discipline, it lasted seven weeks.

Chang concludes with an eloquent appeal to the Japanese government and people to face up to the truth about Japan's wartime government and, most important, to improve education of future generations of Japanese citizens about the massacre. These long-overdue steps are necessary, she says, if Japan is to deserve the respect of the international community. This site uses cookies to improve your user experience. 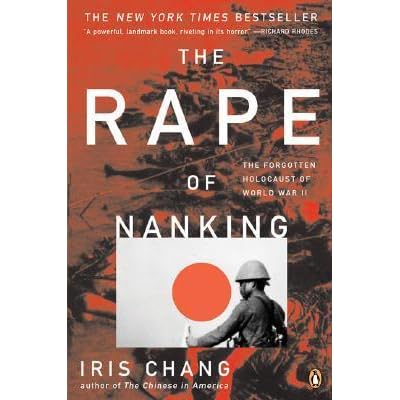 Click here to learn more. In-depth analysis delivered weekly - Subscribe to our newsletter, featuring our editors' top picks from the past week.